Previous Next
Ignatius Leong May 1, 2014 No comments Asia-Pacific, News

Twitter Facebook
On 23 April 2014, Garry Kasparov, 13th World Chess Champion and Candidate for FIDE President, flew into a grand welcome in Kuala Lumpur, Malaysia.After checking into the Putrajaya Shangri-la, first up was an early lunch with the organising committee headed by Tengku Ahamd Badli Shah Raja Hussin, Deputy President & Hon. Secretary of the Malaysian Chess Federation together with Dato’ Sri Mustapa Mohamad, Minister for International Trade & Industry.
(Garry in conversation with Dato’ Sri Mustapha Mohamad, Minister for International Trade and Industry.)
Then it was on to the signing of a Memorandum of Understanding for Chess as an Education Sport between Datuk Ibrahim Ahmad, Director General, Majlis Amanah Rakyat (MARA), an agency under the Ministry of Rural and Regional Development and Tan Sri Ramli Ngah Talib, President of the Malaysian Chess Federation.
The partner for this program is of course the Kasparov Chess Foundation Asia-Pacific.
(Garry with Datuk Ibrahim Ahmad, Director General of MARA listening to Tan Sri Ramli Ngah Talib, President of the Malaysian Chess Federation explain the current adoption of chess in Malaysian education.)
Later that evening Kasparov captivated a large turn out from the ranks of Young Malaysian Corporate Leaders, proving inspirational with his sharing of his career in chess together with giving sound advice on business, life and politics. 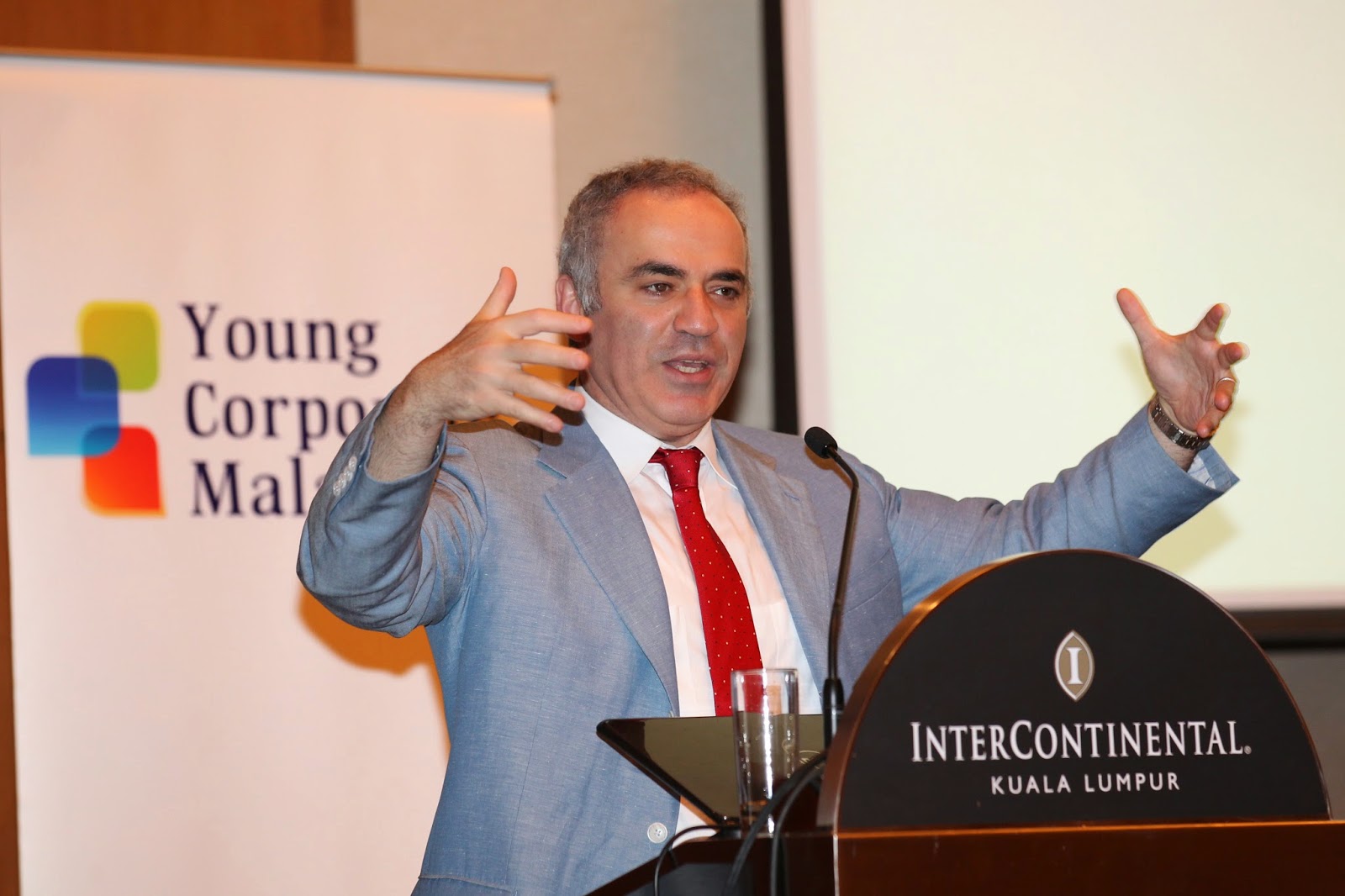 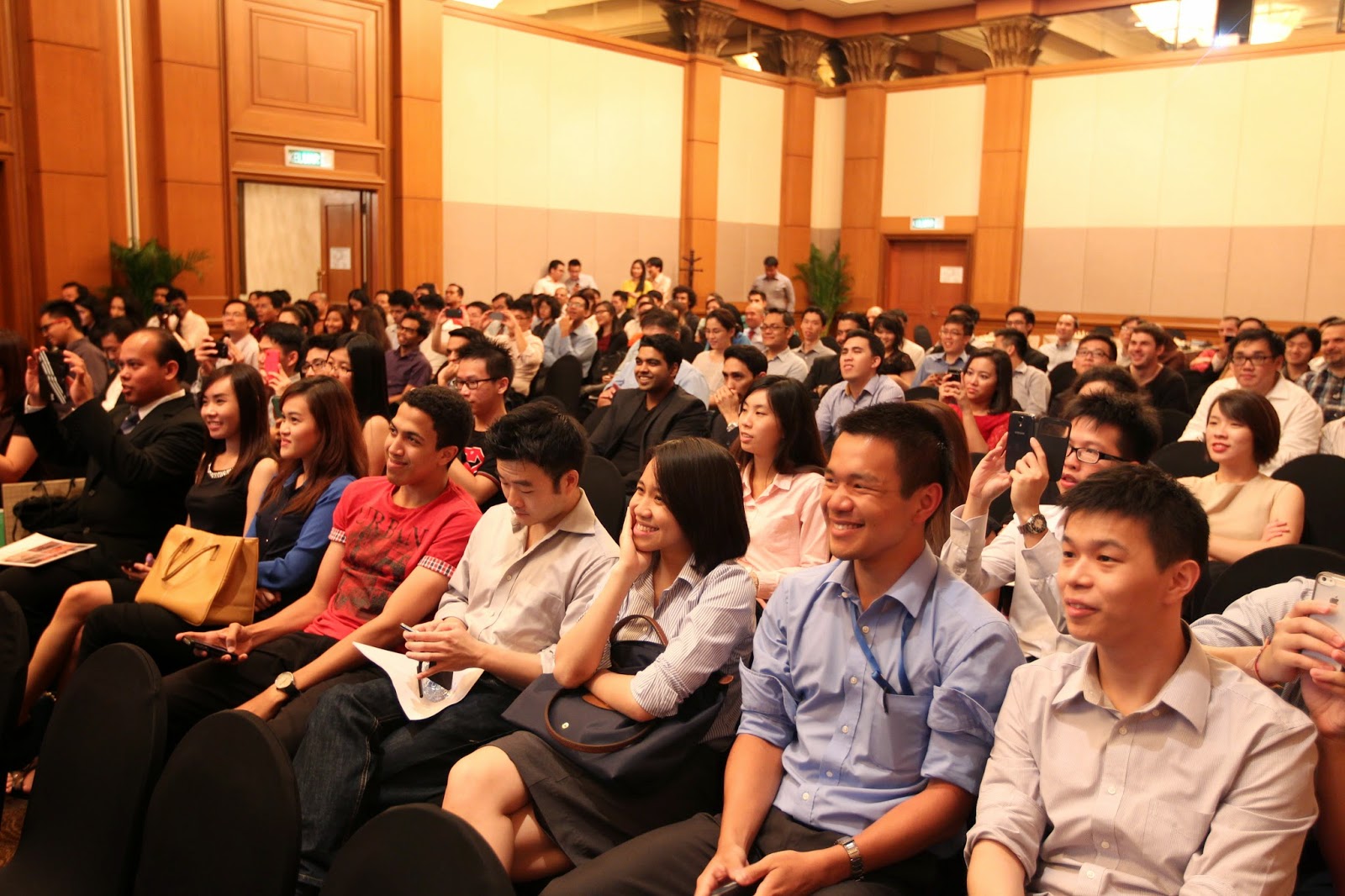 (Young Corporate Leaders enjoying the evening with Garry)
The next day 24th April was the meeting with Khairy Jamaluddin, Minister for Youth and Sports. Brilliant and articulate, the young Minister was quickly able to position chess in Malaysia with the demands of education, why chess could not be a core sport, explaining that he was agreement with and would work with his colleagues in the Education Ministry to support Garry’s vision for chess for education.
(Khairy Jamaluddin, Minister for Youth and Sport with Garry.)
Khairy Jamaluddin was the guest of honour at the Gala Dinner, where in his keynote address after confirming the support of both the Malaysian Chess Federation and the Malaysian chess public for Garry, he endorsed Malaysia’s support for Garry for FIDE President. 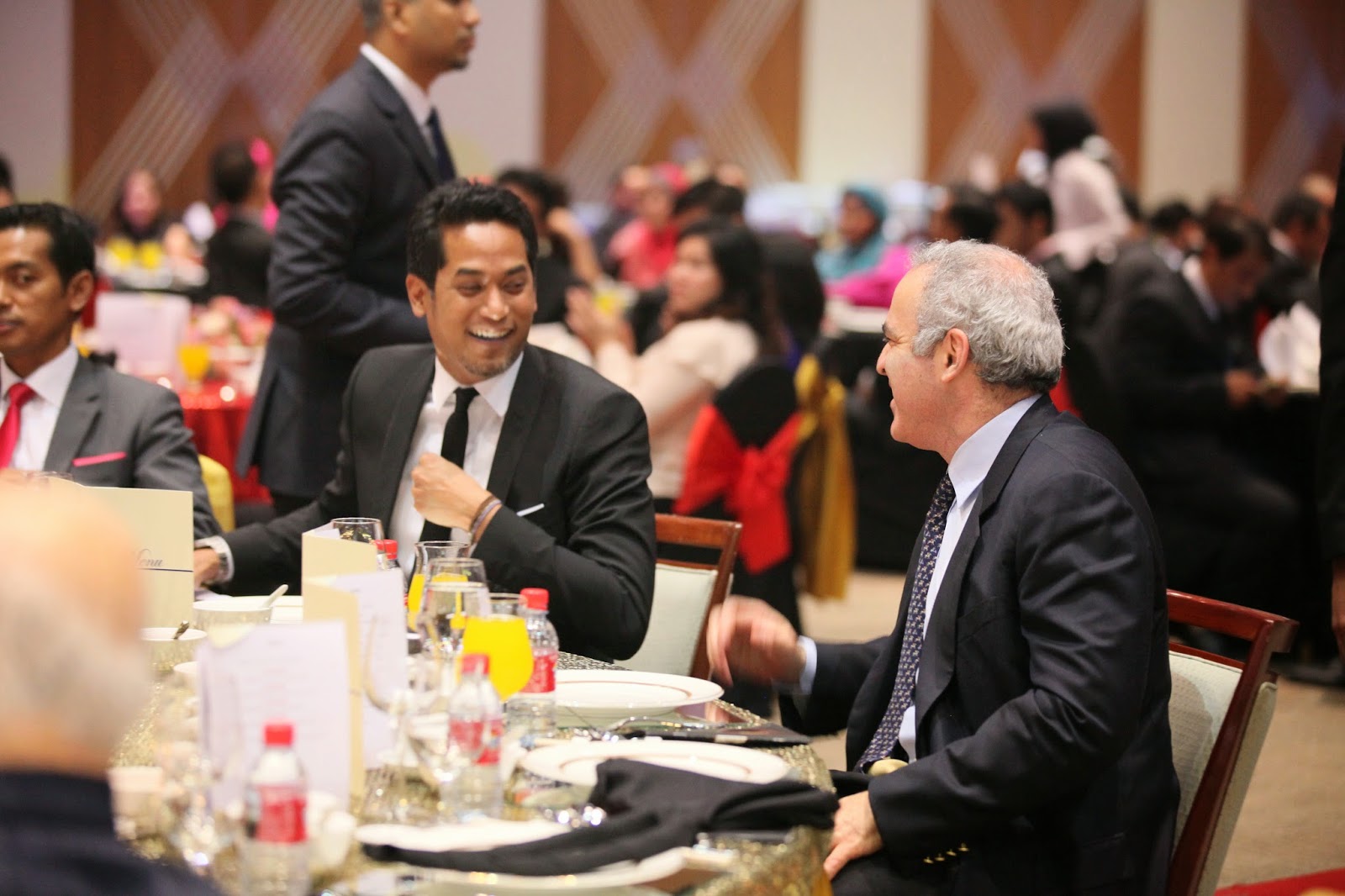 (Khairy Jamaluddin at dinner with Garry) 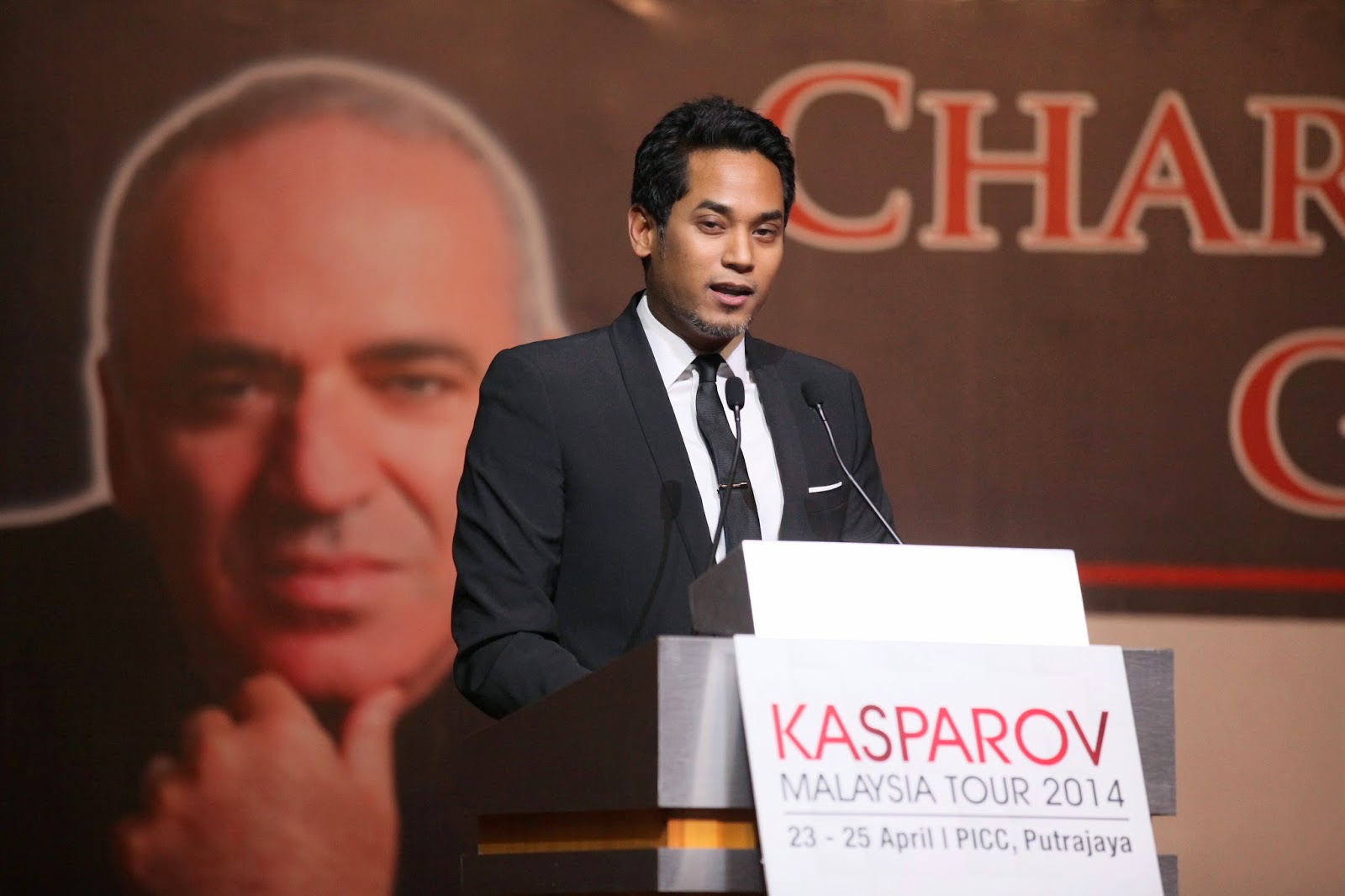 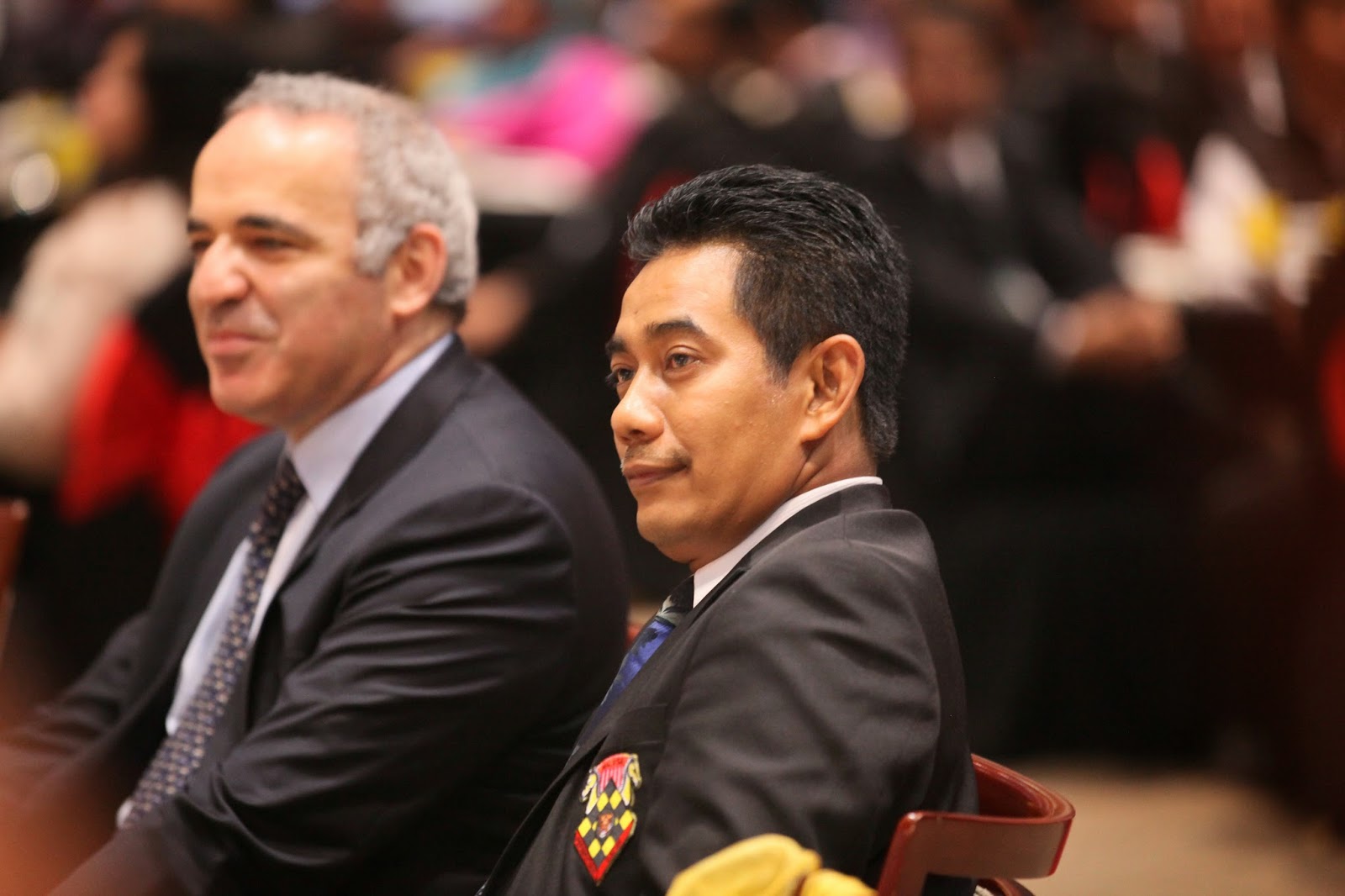 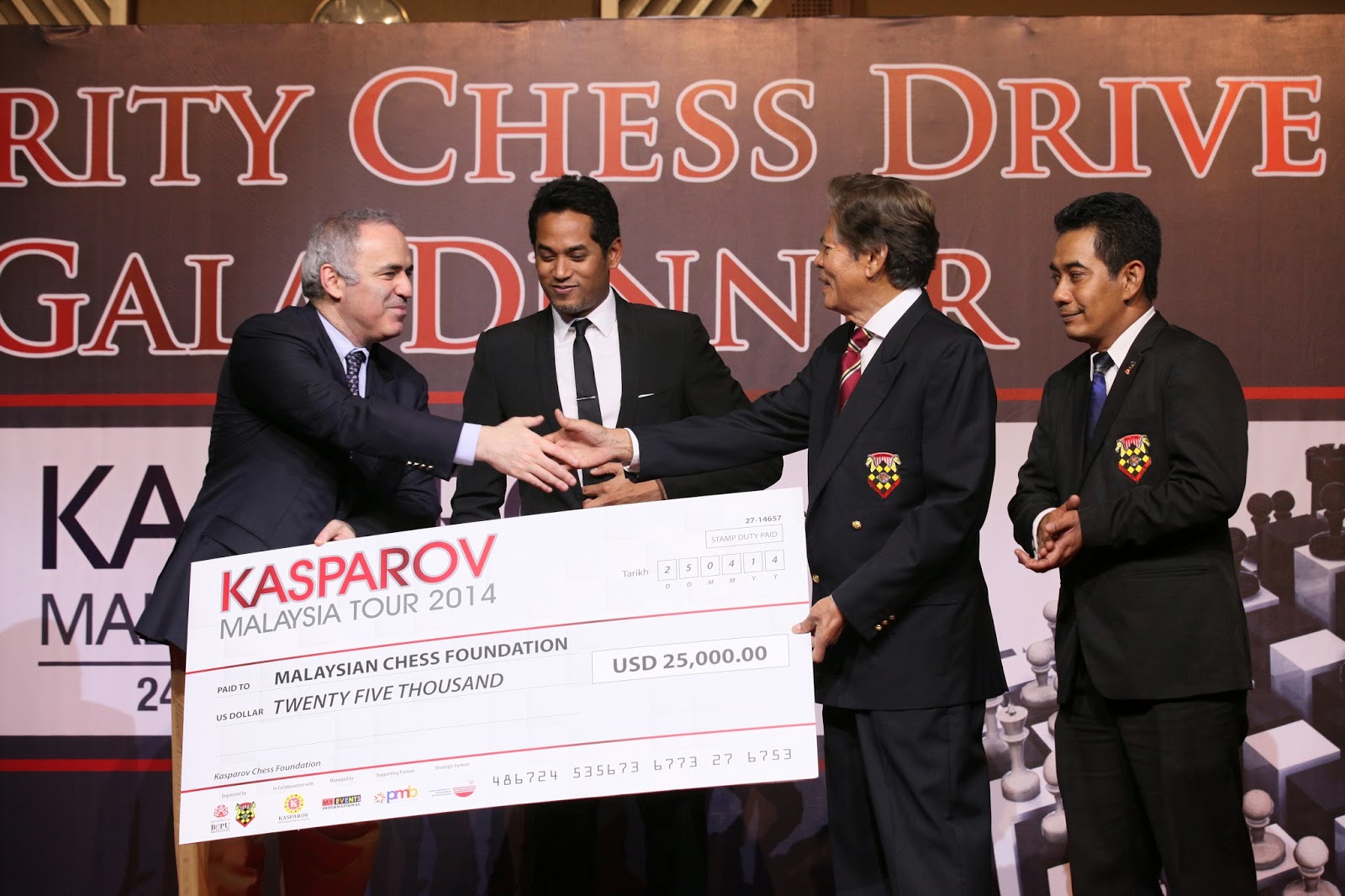 (Garry handling over a cheque to Tan Sri Ramli Ngah Talib as a contribution to starting Malaysia’s Chess in Education Fund.)
No evening with chessplayers could end without some chess and Garry obliged with a simultaneous exhibition with the best chessplayers amongst the dignitaries, all who brought along secret (or not so secret) help. 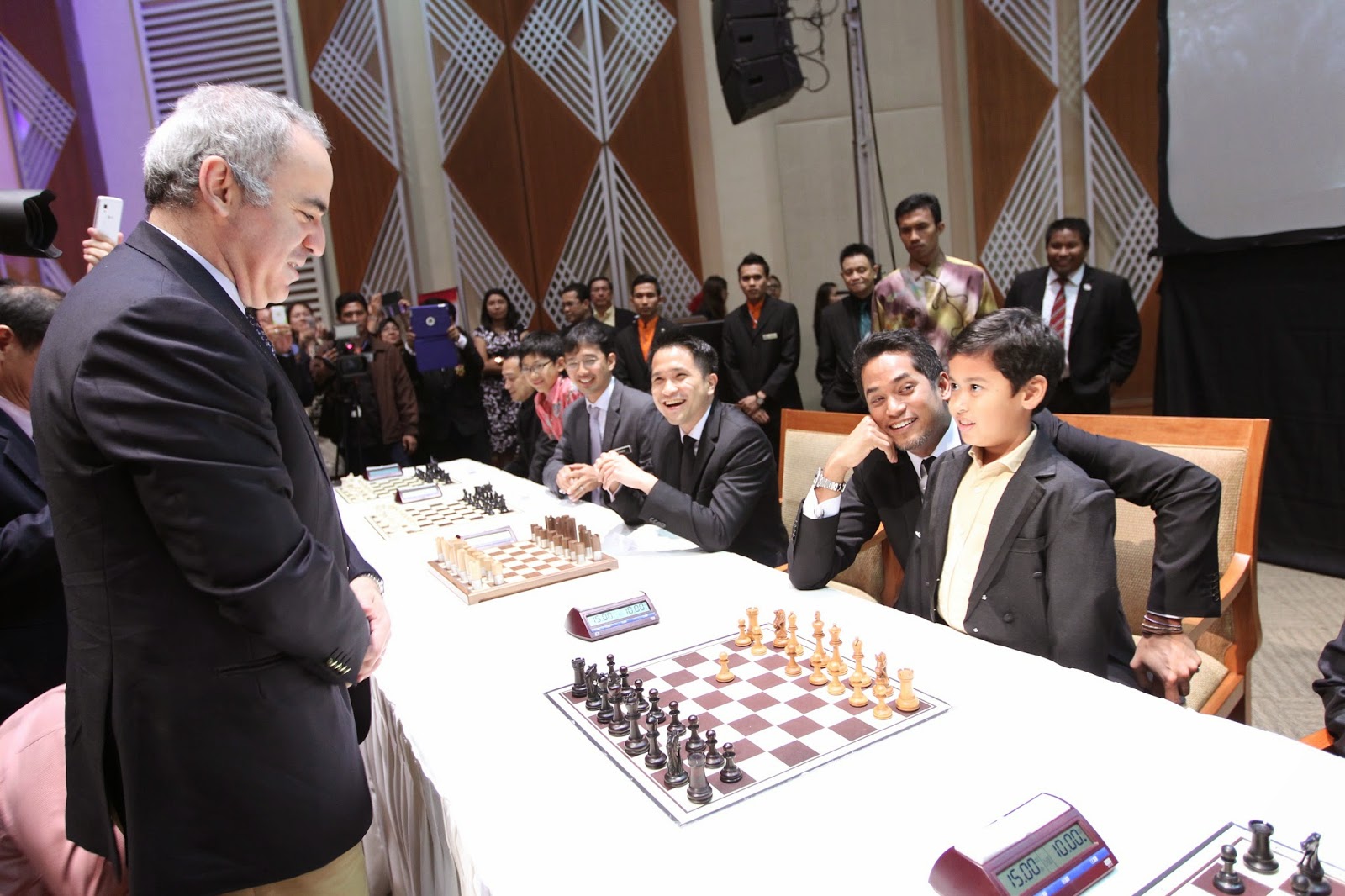 (Garry giving a Simul at the Gala Dinner} 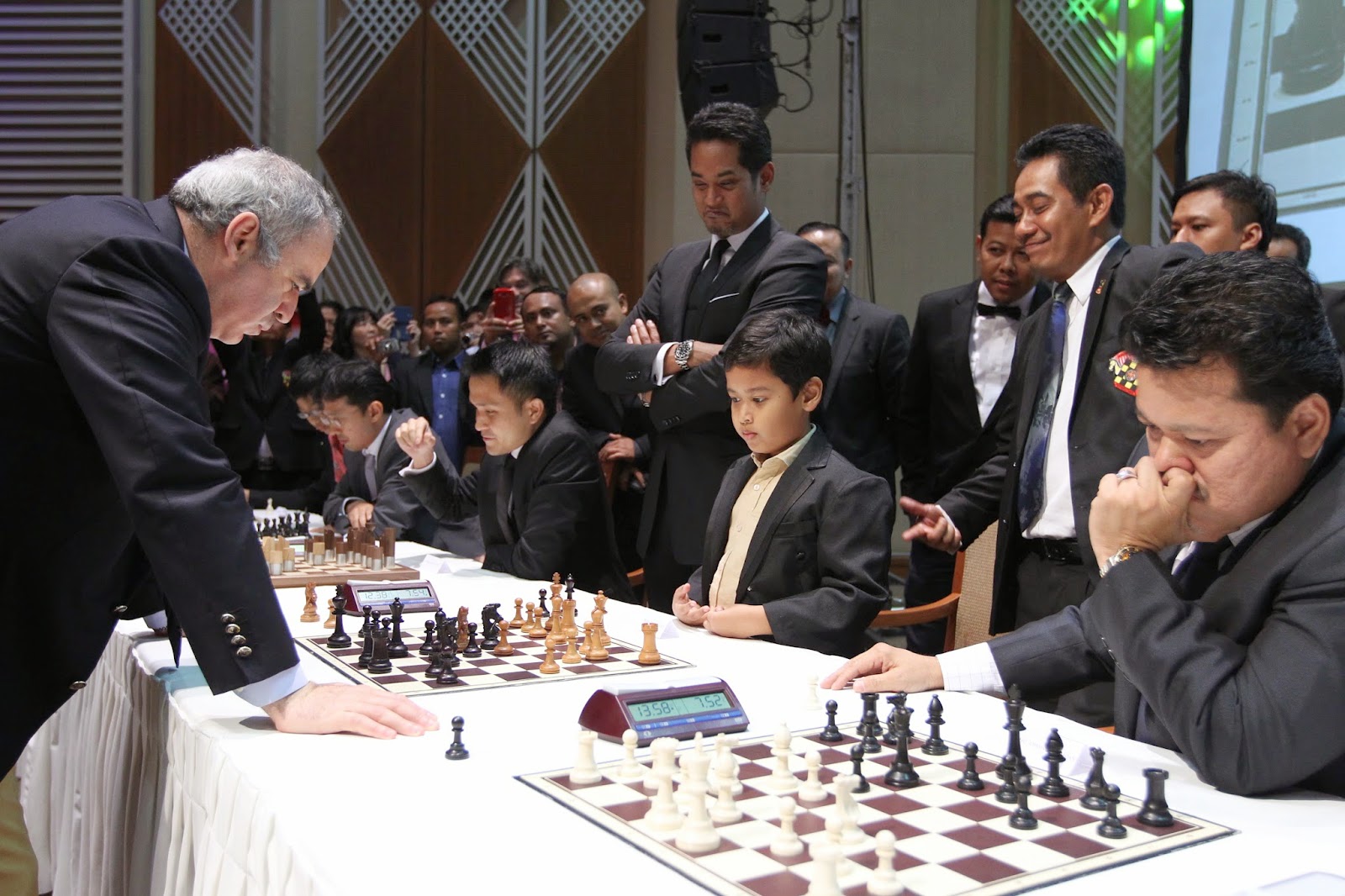 (MCF Official help could not save Dato Suhami Shahdan, Ruling Party UMNO Supreme Council Member.)
The final day in Malaysian was 25th April and first up was the National Age Group Championships had been postponed a week so that Garry could speak to the 600 young talents that are likely to be Malaysia’s chess future. 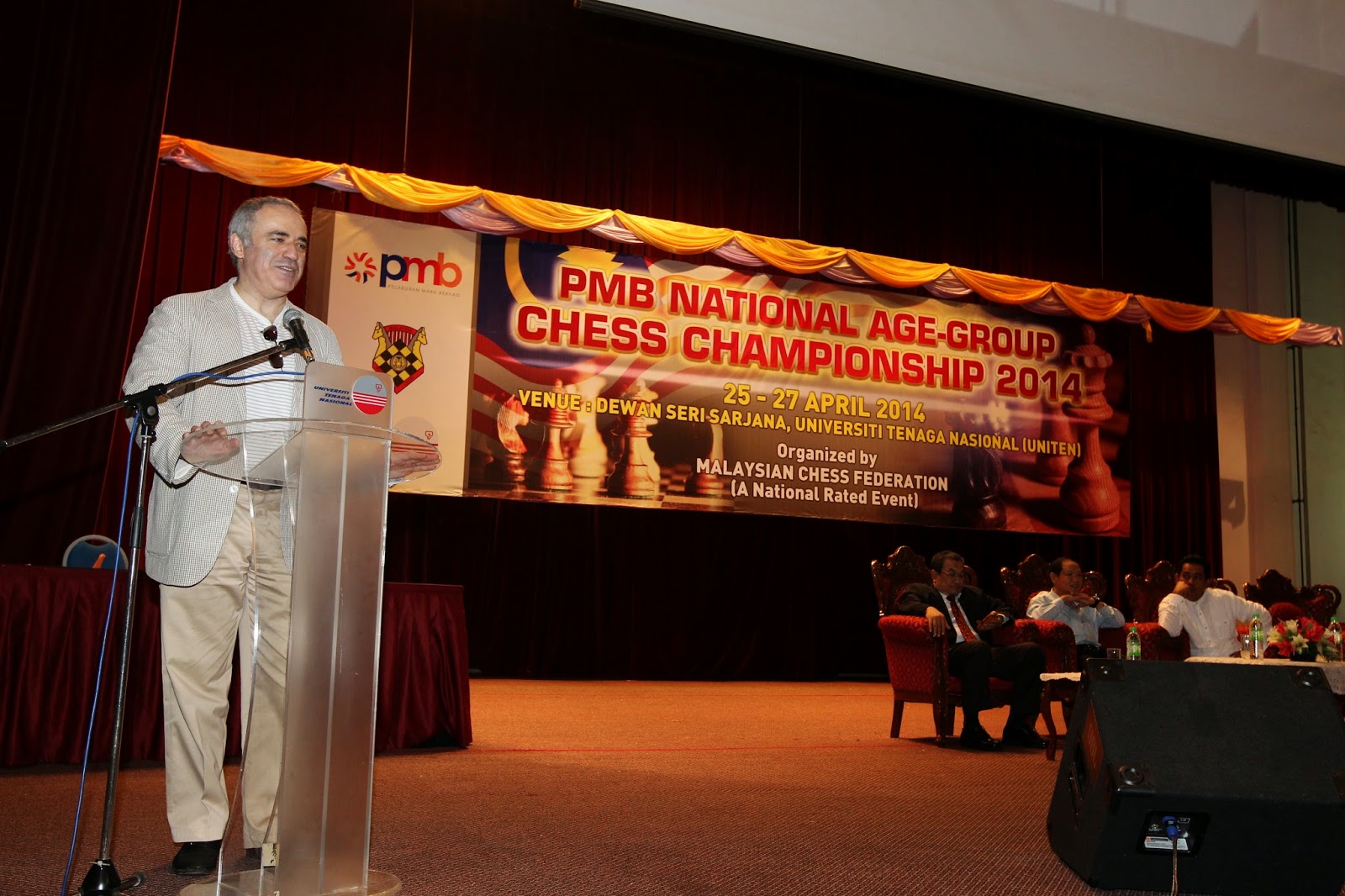 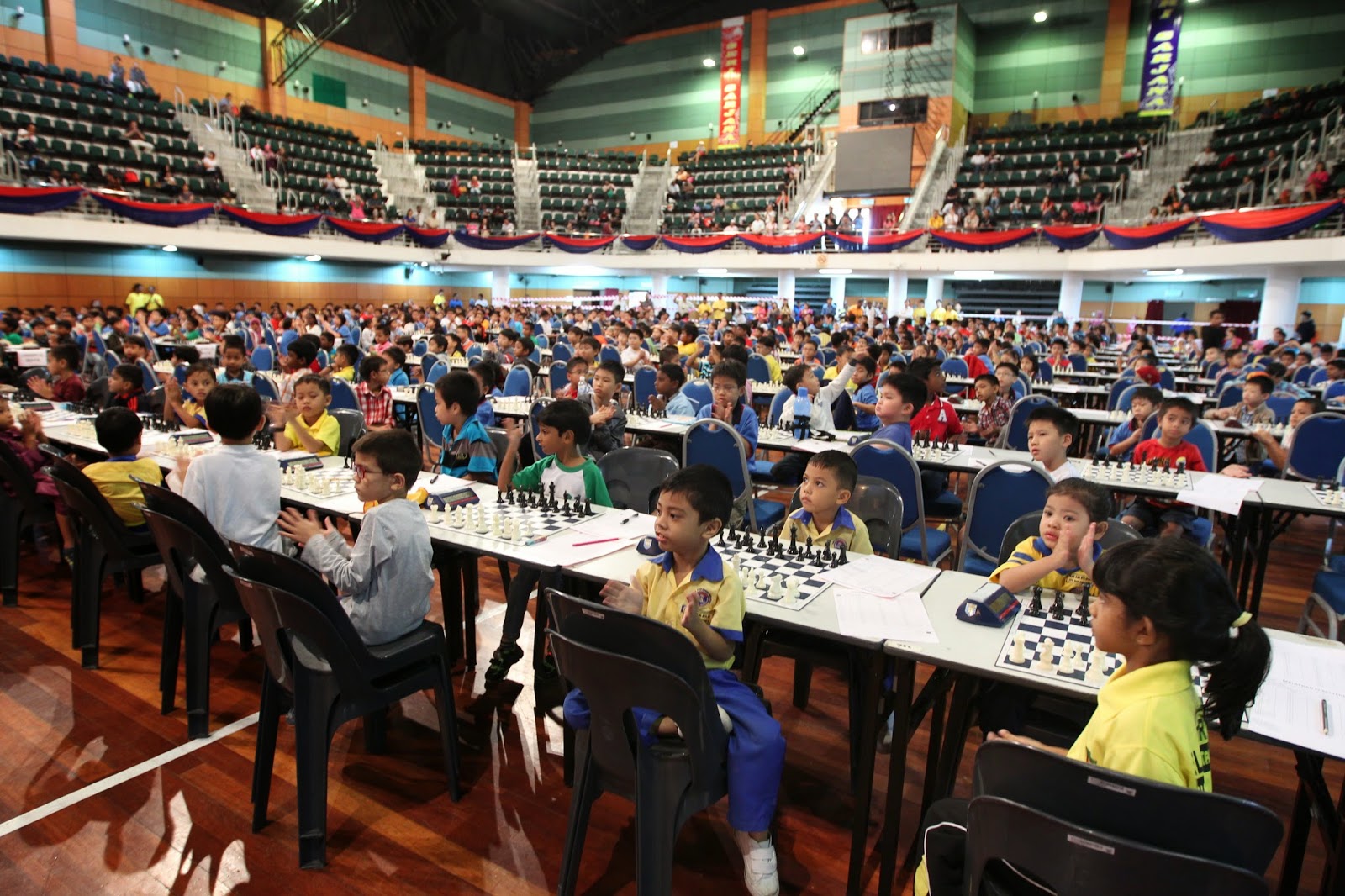 (Some of the Young Participants at the National Age Group Championships.) 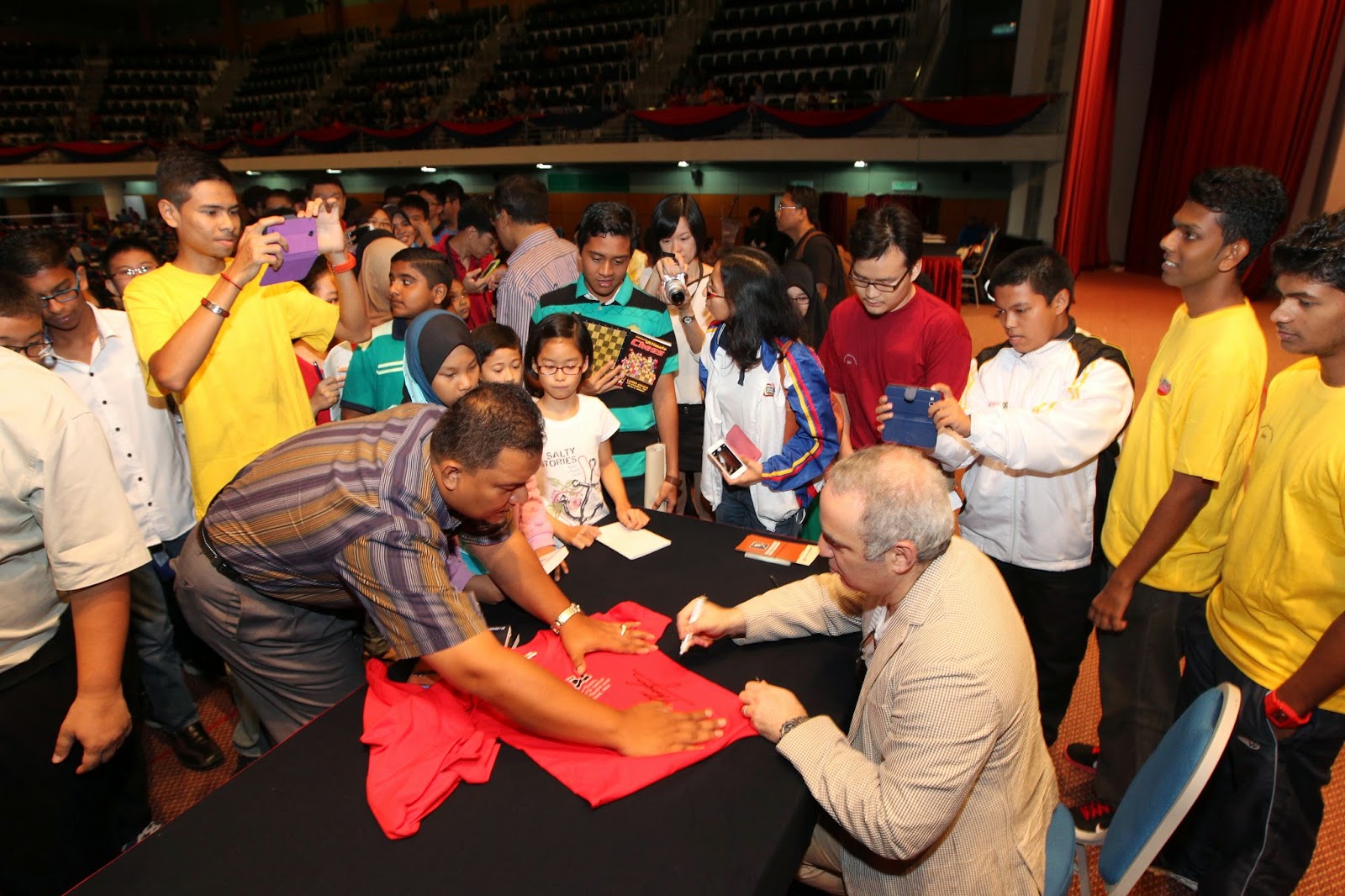 (Parents leading the fight for autographs!)
No chess activity is too small for Garry to support and he was only too happy to officiate at the launch of the University Tenaga Malaysia (UNITEN) chess club. 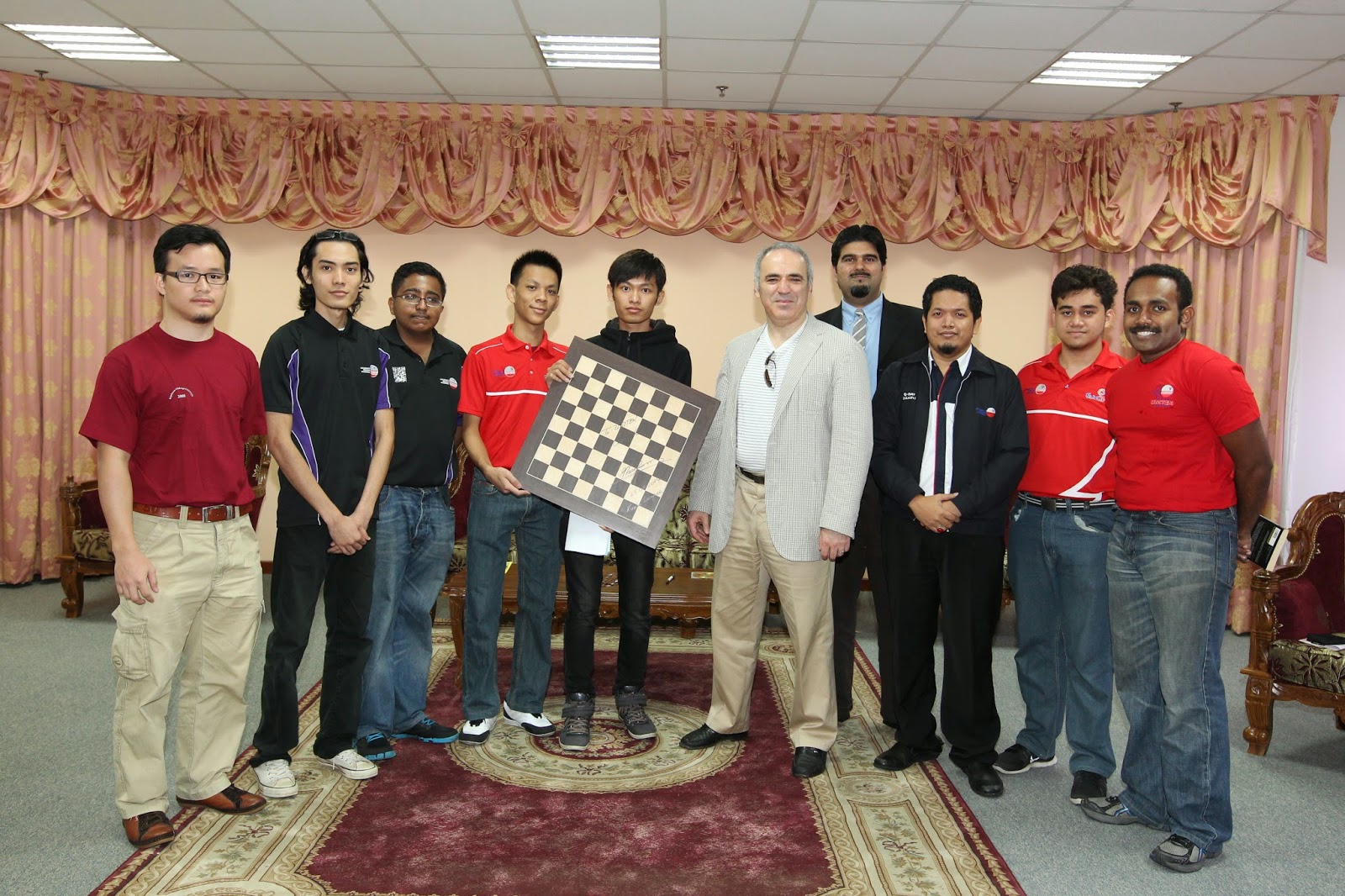 (A New University Chess Club for UNITEN.)
Then came a no holds barred session with Malaysia’s best and brightest young at the Strategic Leadership & Entrepreneurship Conference for Malaysian Youth Leaders with Garry was in his element. 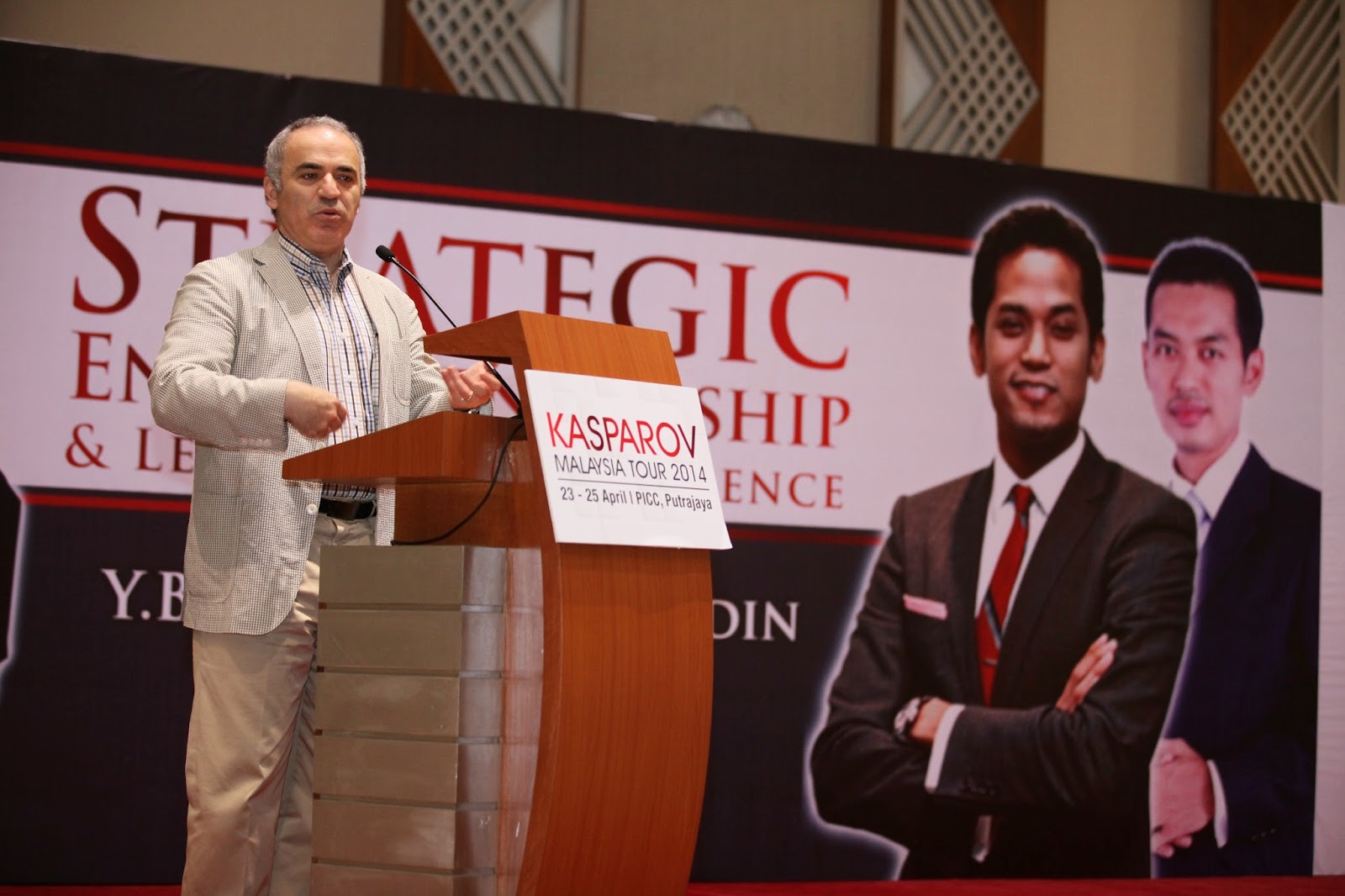 (Dialogue with Youth Leaders.)
Last stop for a truly memorable visit that would certainly not be Garry’s last was the Global Leadership Awards organised by The Leaders International together with American Leadership Development Association (ALDA). 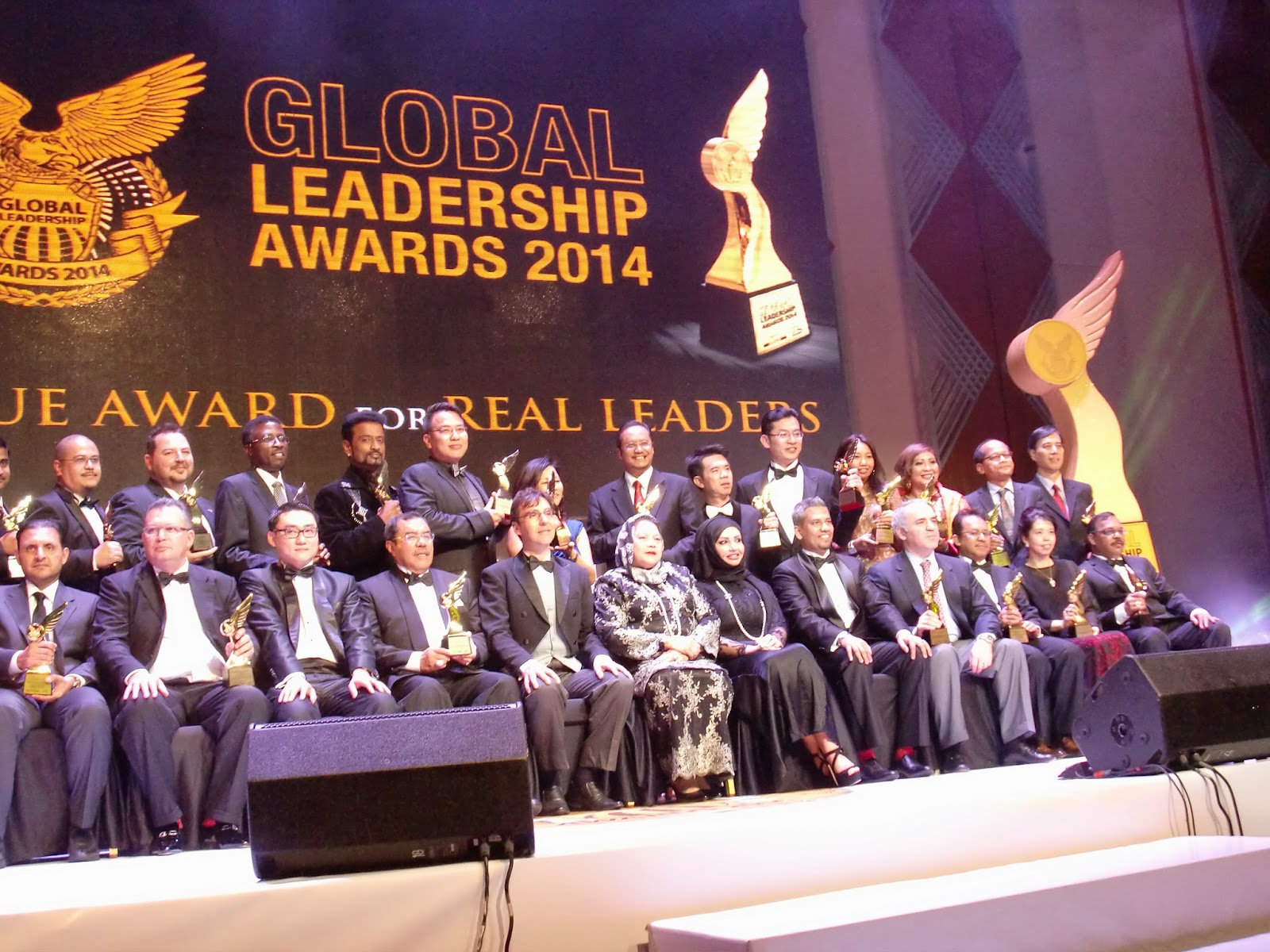 (Group Photo of Global Leadership Awards Winners 2014.)
Garry was honoured with a Lifetime Achievement Award, following no less than another legend in Mohammad Ali as the only other sportsman winner!
Tweet Pin It