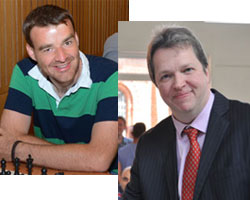 English Grandmasters Nigel Short and Gawain Jones will headline the 2016 New Zealand Chess Open which is part of the 123rd New Zealand Chess Congress which will be held from 2-12 January 2016 in Devonport, Auckland, and which has already attracted six grandmasters (including four rated above 2600) amongst its early entries.

While globe trotting Short will be making his first visit to New Zealand, Jones is a frequent visitor who is practically a local, having married International Woman Master Sue Maroroa from Auckland.

Full details and how to take part is at http://www.newzealandchess.co.nz/NZChamp123/index.html